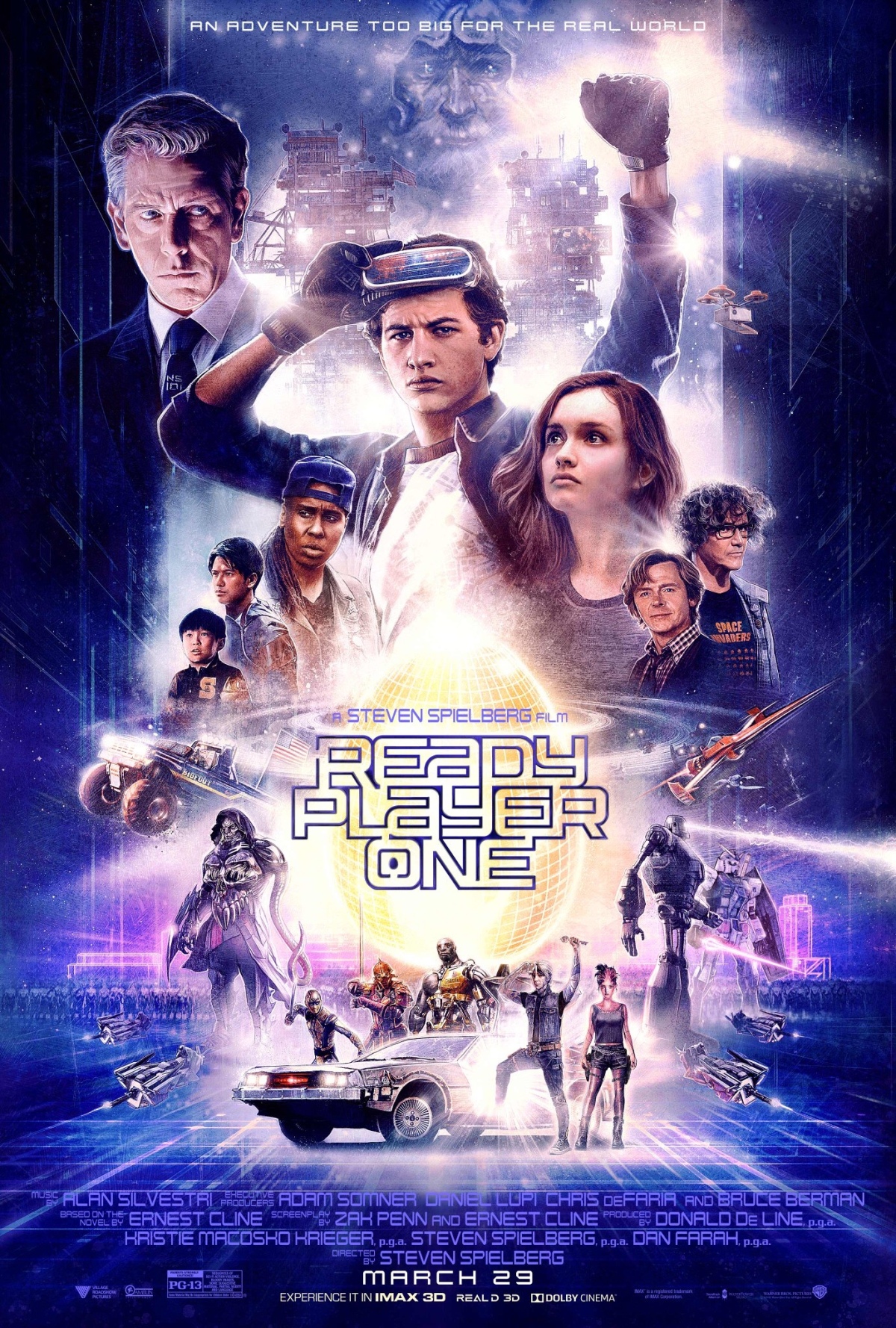 Schmaltzking Steven Spielberg is in regular form with Ready Player One, his film adaptation of Ernest Cline’s 2011 gamer fantasy novel.

Reality bites in 2045, especially in Columbus, Ohio, where Wade (Tye Sheridan) lives with his aunt (Susan Lynch) and her no good boyfriend (Ralph Ineson) in “the Stacks,” a favela-like slum of discarded mobile homes piled on top of each other. Things have stopped working and people have stopped fixing them, and the world has taken on a dystopian Dickensian hue curiously stuck in the 1980s.

Wade, like everyone, escapes to the OASIS, a virtual reality alternate universe where one can be…well, anything. Wade is Parzival, a sort of Speed Racer adventurer. He’s on a mission to win a contest: find the “Easter Egg” left behind by James Halliday (Mark Rylance), the dearly departed creator of the OASIS, and gain total control over it. Parzival just might get by with a little help from his friends — but he’s got to stay a step ahead of one particularly troublesome competitor, corporate bad guy Sorrento (Ben Mendelsohn), who wants to rule the OASIS for all the wrong reasons.

Ready Player One is a typical Steven Spielberg kid’s movie: pop culture, magic, and a total “feel good” ending. I’m not spoiling anything by saying that. It isn’t necessarily better than recent Spielberg films like The Post (https://moviebloke.com/2018/01/26/the-post/) or Bridge of Spies (https://moviebloke.com/2016/02/25/bridge-of-spies/), but Ready Player One is a lot more interesting. Spielberg goes overboard with references to ‘80s films, some of which are his own projects — and I’m told he’s more aggressive than Cline is in the book. Still, the result is a lot of fun, and the details are wicked. A sequence dedicated to The Shining actually made me giddy. Mendelsohn looks so much like the principal from The Breakfast Club (https://moviebloke.com/2016/05/05/the-breakfast-club-2/) that I want to ask him if Barry Manilow knows he raids his wardrobe. Rylance plays Halliday with a strange mix of Christopher Lloyd, Steve Jobs, and, err, Spielberg.

I’m no fan of late period Spielberg, but I didn’t mind this one. Make no mistake, Ready Player One is a big, loud, overdone Hollywood movie, but it’s a decent one. Those who grew up watching Spielberg movies (like I did) no doubt will enjoy it even though they probably don’t need to see it a second time.

Newcomer Cory Finley’s nihilistic dark comedy Thoroughbreds tells the story, as one of its promotional posters puts it, of good breeding gone bad. Two suburban Connecticut high school girls, misfit Amanda (Olivia Cooke) and go getter Lily (Anya Taylor-Joy), reconnect under the guise of tutoring. They were friends in grade school until Lily’s father died; now Amanda’s mother (Kaili Vernoff) is paying Lily to hang out with her daughter, who has a mystery mental disorder that renders her incapable of feeling emotion.

Amanda meets Lily’s stepfather, Mark (Paul Sparks), a rich, domineering, and caustic control freak. Lily hates him but gets upset at Amanda’s suggestion that maybe he should die. She has a change of heart when Mark convinces Lily’s mother (Francie Swift) to send her away to a boarding school for “problem” girls. The two teens devise a plan to kill him. Enter slacker drug dealer Tim (Anton Yelchin) to execute the plan.

Thoroughbreds has all the elements of a winner. Finley’s script tells a good, dark story. Cooke channels Cristina Ricci, playing Amanda with all the macabre emptiness of Wednesday Addams. Ultimately, though, this is no Heathers. I found Thoroughbreds a bit rambling. It’s an okay film, but just okay — it’s probably not something I’m going to view again. Aaron enjoyed it more than I did.

American Horror Story: Coven director Alfonso Gomez-Rejon’s adaptation of the 2012 novel of the same name by Jesse Andrews, who wrote the screenplay. Me and Earl and the Dying Girl is a simple and underwhelming story, really, with a punchy if morbid title: a self-deprecating goofball teenager named Greg (Thomas Mann) is forced by his mother (Connie Britton) to hang out with prickly classmate Rachel (Olivia Cooke), who is sick with leukemia. Greg’s mother thinks it would be a “nice” thing to do to “make her feel better.”

Rachel is on to Greg, though, and she resents his pity. Nonetheless, the two go through the motions of faking a friendship to get their mothers—Molly Shannon plays Rachel’s mom—off their backs. After Greg introduces his buddy, Earl (R.J. Cyler)—the two of whom make parodies of real films with titles like “Senior Citizen Cane,” “My Dinner with Andre the Giant,” and “Rosemary’s Baby Carrots”—the three develop a friendship. Greg and Earl set out to make a movie for Rachel.

Me and Earl and the Dying Girl easily could have gone off the rails and become an insipid little mess, but it doesn’t. It holds together quite well, probably because it’s full of funny (and cringeworthy) moments despite its sad subject matter. Two things make this film exceptional: the acting is superb, and the script nails teenage boy angst with laser precision.