The “road movie” is a subgenre that I think of as an American convention. They tend to involve younger people on a quest for something, perhaps a race (The Cannonball Run), a chase (Convoy), a new life (Alice Doesn’t Live Here Anymore), a vacation (National Lampoon’s Vacation), a mission (Pee-Wee’s Big Adventure), or or just getting laid (Losin’ It). They don’t usually involve gay men or drag performers or Australians for that matter, which makes The Adventures of Priscilla, Queen of the Desert rather compelling for its subversiveness if nothing else.

True, the world had seen a road movie with gay characters before (My Own Private Idaho, which predates this one by three years, comes to mind) and Australians (Roadgames, Backroads). However, The Adventures of Priscilla, Queen of the Desert is different. It’s every bit as fierce as Mad Max, but it’s fabulously fun—as though a team of drag queens tossed a bunch of glitter and disco (and CeCe Peniston) into the mix.

Anthony “Tick” Belrose a.k.a. Mitzi Del Bra (Hugo Weaving) is a drag performer in Sydney who accepts an offer to perform at a casino resort operated by his estranged wife, Marion (Sarah Chadwick), in remote Alice Springs—in the middle of the continent. He gets his buds Bernadette Bassinger (Terence Stamp), a recently widowed transgender woman, and Adam Whitely (Guy Pearce), an obnoxious younger queen whose drag name is Felicia Jollygoodfellow, to join him.

They hit the road in a huge silver tour bus that they christen “Priscilla, Queen of the Desert” and embark on a journey through the desert. A clan of Aboriginals is very welcoming, allowing the three to perform for them. Not everyone is nice, though, which they soon discover when some outbackass bumpkins spraypaint “AIDS Fuckers Go Home” across the side of the bus.

The three contend with the bus breaking down, a homophobic gang, what appears to be an inescapable bar brawl, and secrets—quite a few secrets. Some of the stuff that happens is predictable, but writer and director Stephan Elliott manages to keep the whole thing fresh because he infuses some great conflict and character development into the narrative. Bernadette’s subplot, a soul searching midlife “where do I go from here” kind of existential crisis, is probably the most interesting part of the movie. The acting—Weaving and Pearce (who looks like a cross between Brad Pitt and Mark Wahlberg) for sure, but especially Stamp—is moving for something that appears to be heading toward frivolous and campy territory. It doesn’t quite stop there. What the characters all end up with is something maybe none of us saw coming: acceptance.

What makes The Adventures of Priscilla, Queen of the Desert so great, still, is that it’s full of surprises. 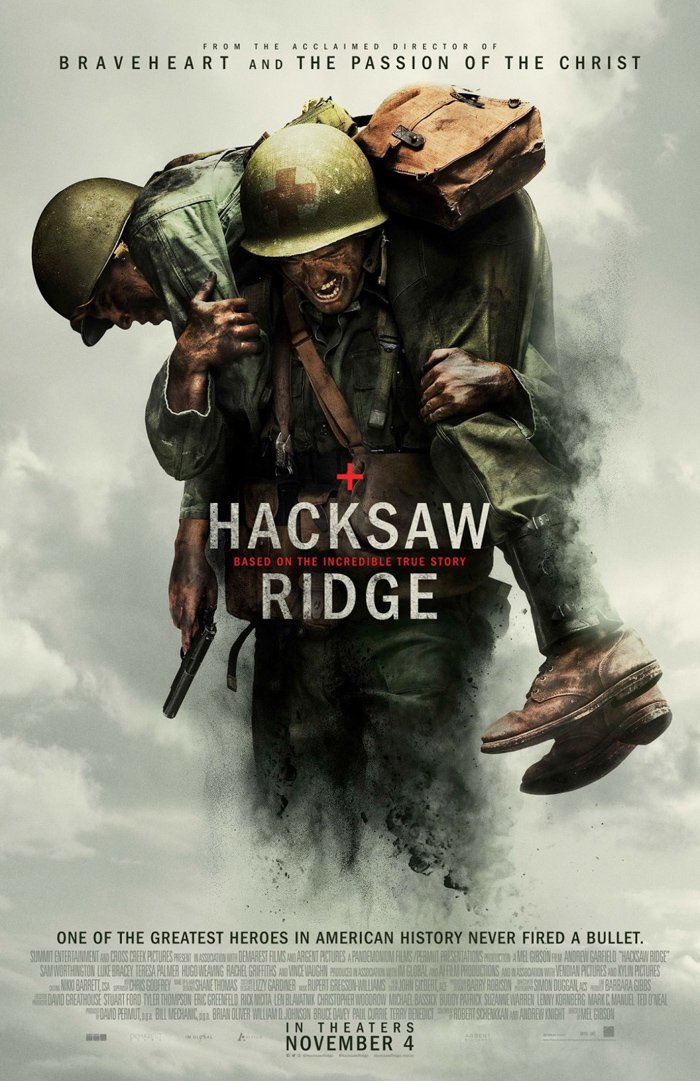 “Thou shalt not kill.”

“I don’t know how I’m gonna live with myself if I don’t stay true to what I believe.”

Like him or not, Mel Gibson has what it takes to direct a massive Hollywood picture. Hacksaw Ridge, his first directorial job in a decade, demonstrates that much—just in case earlier films like Braveheart, The Passion of the Christ, and Apocalypto didn’t.

Hacksaw Ridge depicts the remarkable and true story of Desmond Doss (Andrew Garfield), the Lynchburg, Virginia, Seventh-day Adventist who served as a medic in the U.S. Army during World War II. His story is unique: he enlisted, but as a conscientous objector for religious reasons. Refusing to kill or carry a gun, he rescued 75 or so wounded soldiers from the field during the Battle of Okinawa (http://www.collegedale-americanlegion.org/Pages/DesmondTDoss.aspx). President Harry S. Truman awarded Doss the Congressional Medal of Honor in 1945, the first time such a high accolade was bestowed upon someone who never even discharged a weapon (https://en.wikipedia.org/wiki/Desmond_Doss).

From a technical standpoint, Hacksaw Ridge is pretty awesome. The story is a good one. The battle scenes are clearly the centerpiece: they’re loud and extremely graphic. The prosthetics are spot on realistic. Cinematographer Simon Duggan starts out with warm, almost sepia tones in the early civilian scenes, but as the setting moves onto the battlefield he ditches color in favor of a washed out black, green, and white palette. Shaky closeups, slow motion shots, blurry pans, and quick cuts create a sense of confusion as gunfire and explosions and human carnage take over the screen. Hacksaw Ridge is no Son of Saul (https://moviebloke.com/2016/02/11/son-of-saul-saul-fia/), but it still overwhelms the senses albeit in a distanced, staged blockbuster way.

Otherwise, Hacksaw Ridge didn’t impress me all that much. At its core, it’s a standard-issue war movie complete with a sugary subplot about the girl, Dorothy Schutte (Teresa Palmer), waiting for Doss to hurry up and get back home so they can get married, and lots of humorous if mawkish male bonding through nicknames, insults, physical attacks, and simply having each other’s back. There’s a military court scene, trite “war is hell, boys” lines, soldiers who freak out once they get on the battlefield, likable characters who perish, and of course the superhuman heroic deeds of Doss.

Most character background is given hurried and superficial treatment: Doss’s alcoholic veteran father (Hugo Weaving) and his bad experience in World War I, Doss and Dorothy’s quick courtship, even the failed attempts of Sgt. Howell (Vince Vaughn) and Cpt. Glover (Sam Worthington) to persuade Doss to leave the Army. Too bad, because a little more insight could have made the film stronger. A particularly glaring example is brother Hal (Nathaniel Buzolic), who simply vanishes once he shows up at the dinner table in uniform. What happens to him? Did I miss it?

I’m conflcited on the message here, but I guess that’s okay because frankly Hacksaw Ridge is a conflicted film. Gibson maintains that it’s an anti-war statement (http://www.christianpost.com/news/mel-gibson-hacksaw-ridge-is-an-anti-war-movie-170318/). Fine, but that’s hard to believe considering the disproportionate amount of time and resources given to overblown battle scenes. I’m not sure the film honors Doss or his pacifist convictions. Moreover, what sure seems like a blatant parallel to the so-called religious liberty movement is, in my view, misguided and hollow, especially when Doss’s faith is treated more or less as incidental. Hacksaw Ridge sustained my interest, but I would have appreciated a little more depth.

Like any kid, five-year-old Saroo (Sunny Pawar) is enamored of his older brother, Guddu (Abhishek Bharate). Saroo shadows Guddu everywhere, helping him do things like steal coal from trains to trade for milk for their penurious mother (Priyanka Bose) and little sister (Khushi Solanki) in their tiny village in India. After begging his brother to take him to “work” with him in a nearby city one night, both boys quickly learn that Saroo is too young to hack the late shift. Guddu leaves Saroo on a bench at a train station, promising to be right back. Saroo dozes off, waking up on an empty platform in the middle of the night. Scared and maybe cold, he gets on a vacant train and drifts back to sleep in one of the compartments. He’s jolted up while the train is speeding through terrain he’s never seen before.

The train takes Saroo to Kolkata (formerly Calcutta), where he must fend for himself. He doesn’t know the city, the language, or even his mother’s name. Kolkata is dangerous for a kid: Saroo is nearly abducted at the train station. He meets Noor (Tannishtha Chatterjee), a seemingly nice lady who takes him in. Saroo senses that her creepy friend Rawa (Nawazuddin Siddiqui) has nefarious plans for him, so he bails. A man (Riddhi Sen) eating in a café takes Saroo to the police, who turn him over to an orphanage. They try to find Saroo’s mother, but he’s unable to provide any useful information. Mrs. Sood (Deepti Naval) teaches him English and manners. An Australian couple, John (David Wenham) and Sue Brierley (Nicole Kidman), adopt him.

To use a line from the Beastie Boys, you think this story’s over but it’s ready to begin. Cut to 2008: Saroo (Dev Patel) is grown up, Westernized, and starting school for hospitality management. During introductions, he tells his classmates that he’s from Calcutta but that’s about all he knows. While attending a friend’s party, he goes to the kitchen to get a beer and sees a plate of jalebi, an orange deep-fried Indian pastry. It triggers his memory, and he becomes obsessed with finding his “real” family.

Adapted from Saroo Brierley’s memoir A Long Way Home, Lion plays out as two movies: one about young Saroo, and the other about adult Saroo. On an emotional level, Lion is a beautiful and powerful accomplishment—I defy anyone not to feel something from this film, which deals with identity, family, and home. Even so, it’s flawed. First-time feature director Garth Davis is really heavy-handed with the tears, so much that Lion comes off as trying too hard—manipulative, even. Davis connects the two stories, but he treats them vastly differently. The pace of young Saroo’s story is far superior: it flows naturally, unlike adult Saroo’s, which is choppy and abrupt. Young Saroo’s story is insightful and lyrical, while adult Saroo’s is too often inelegant. I found the unevenness distracting. Plus, the apparitions of Guddu and Saroo’s mother in Australia got silly after awhile. It shouldn’t be difficult to tell from the first three paragraphs of this entry which story I found more engaging.

Even with its flaws, Lion is still a good movie—well worth the two hours it eats of your life. The acting all around is superb, though Lucy (Rooney Mara) is a bit superfluous. Patel is great, but Pawar is the star here; it’s hard to believe this is his first film. Sia’s “Never Give Up,” which plays over the closing credits, will get stuck in your head for days.

Tom Hardy is Mad Max, and he’s taken captive by Immortan Joe (Hugh Keays-Byrne) and his gang of warboys who look like an army of “Zero” era Billy Corgans. Max gets away and finds himself working with Furiosa (Charlize Theron), a rig driver liberating a gaggle of Joe’s “breeders”—young women he keeps for reproductive purposes. Loaded with fast cars, a badass woman, fox females, a rock band, and weapons, the first hour is nonstop noise and destruction. There’s some decent acting in the middle, but it doesn’t last. A final plan to take out Joe brings on another barrage of destruction.

Mad Max: Fury Road is exactly what it’s supposed to be: an action picture. The costumes and cars are imaginative even if derivative. John Seale’s cimenatography is snappy: he makes the desert look hot, colorful, and stunning with not all that much to work with. It’s easily the film’s most impressive element. Hardy is nice to look at, all rugged and filthy and with all his teeth (unlike many other characters). This is about all I can say that’s positive. Director George Miller’s cho-mo (my term for choppy motion) technique gives the film a cheesy, horror movie look. There are no big surprises here—we know how it ends.

Mad Max: Fury Road is an indulgent, guilty pleasure for those who dig this stuff. I’m just not one of them. Best Picture, my ass.

The Little Death is not so much a story as a whole but rather a very amusing series of vignettes with interrelated characters caught in the throes of one fetish or another: podophilia, dacryphilia, somnophilia, rape fantasy, role playing. We laughed out loud often at the situations that played out, particularly between a cute deaf guy (T.J. Powers) using a female sign language interpreter (Erin James) to call a phone sex hotline.

Despite sex and all its weirdness woven throughout, there is a central tenderness that comes through each character. The film deals less with actual sex than the things that people long for: connection, acceptance, excitement, feeling attractive. The Little Death did not get great reviews; but being a fan of dark, quirky, and risqué humor, I loved it.