“The Fault…is Not in Our Stars,
But in Ourselves…”

I’ve read enough online rankings of Alfred Hitchcock’s films to know that Spellbound often ends up in his top 20 or 30—sometimes higher than that—thank you. While certainly impressive considering the number of films he directed (https://en.wikipedia.org/wiki/Alfred_Hitchcock_filmography), I found Spellbound lackluster, comparatively speaking.

It’s not that I didn’t enjoy it. In the grand scheme of all things cinema, Spellbound is a solid work—it’s just not a great Hitchcock film. Ingrid Bergman is psychoanalyst Constance Petersen, the only female doctor at Green Manors, a mental hospital in Vermont. Her male colleagues see her as detached and cold, which doesn’t bode well for her career—particularly for a woman in the 1940s.

The hospital’s director, Dr. Murchison (Leo G. Carroll), is “retiring.” His replacement is young and handsome Dr. Anthony Edwardes (a young Gregory Peck), who catches Dr. Petersen off guard. Truth be told, she’s smitten—and who can blame her? Gregory Peck is gorgeous here. Anyway, Dr. Edwardes has a secret that becomes apparent: he’s not who he says he is. He’s actually John Ballantyne, a.k.a. John Brown, a dude with amnesia who says he killed the real Dr. Edwardes and assumed his identity. Dr. Petersen doesn’t believe him, and she sets out to find the real murderer—through psychoanalysis. It all leads to a fateful ski trip that comes full circle to Green Manors. Gasp!

Angus MacPhail and Ben Hecht based their screenplay on the 1928 novel The House of Dr. Edwardes by John Palmer and Hilary A. Saunders (as Francis Beeding). Clearly obsessed with Sigmund Freud, the story is clunky but cute and oddly entertaining even if it’s kind of stupid. Two things stick out in my mind about this film: one is Salvador Dalí’s cool dream sequence complete with random objects like big bleary eyes, scissors, a faceless figure, and wings; and that final scene where a gun is fired into the camera—I won’t ruin it, but it literally ends Spellbound with a bloody bang. Fucking awesome!

The nitrate print used for this screening was gorgeous, shimmering with rich blacks and luminescent whites. It impressed me. Miklòs Ròzsa’s grand, sweeping score is fierce—no wonder he won an Oscar for it (https://www.oscars.org/oscars/ceremonies/1946).

One extremely personal but annoying detail: the Siouxsie and the Banshees song “Spellbound” played in the back of my mind the entire time I watched this film. Yeah, I’m hearing voices, I guess…but it could be much worse (I’m talking to you, Paula Abdul). 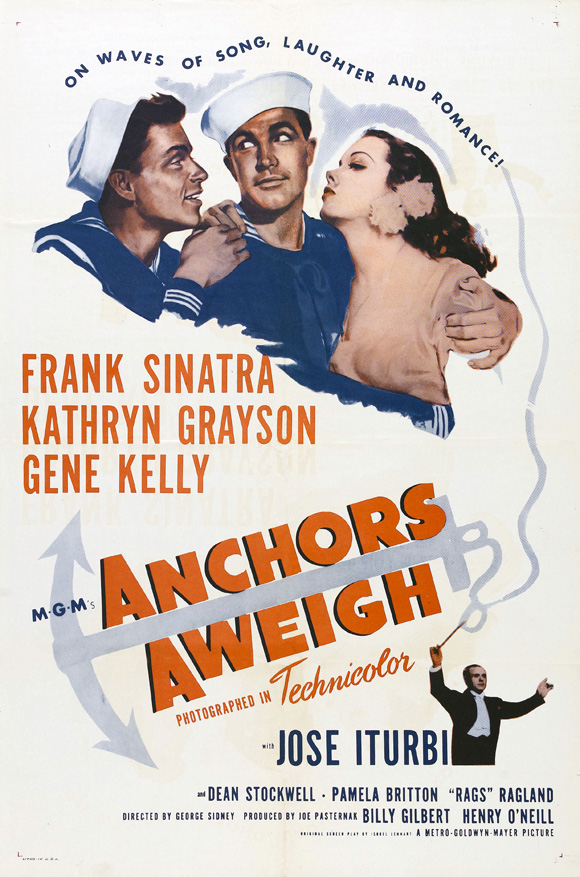 I doubt Crowther meant “gay” in the current sense of the word, but he certainly wasn’t wrong either way: between all the singing, dancing, handsome sailors in tight pants, and a very young and wide-eyed Frank Sinatra acting out a creepy attachment to Gene Kelly, the only thing that could make Anchors Aweigh any gayer would be an appearance by Judy Garland. Or a raunchy sex scene with all those sailors and the admiral who, in one number (“We Hate to Leave”), said he would beat them with a whip. I half expected and kinda wanted it to happen, but of course it didn’t. Oh well.

As a reward for their bravery, Navy seamen Joe Brady (Kelly) and Clarence Doolittle (Sinatra) are given a four-day leave in Hollywood. Joe plans to hook up with his dame, Lola. After stalking him on the streets of Los Angeles, sweet and naive ex choir boy Clarence asks the apparently more experienced Joe to teach him how to meet girls.

Enter Donald (Dean Stockwell, whom most of us know as a middle-aged man from his many ’80s and ’90s movies), a little tyke who’s running away from home to join the navy. Our boys take him home, where Donald lives with his Aunt Susie (Kathryn Grayson), a nice girl trying to get into the movie industry—if only she could catch a break. Clarence immediately falls head over heels and enlists Joe’s assistance in wooing her, which provides the story here.

Even though (and probably because) the characters, plot, and dialogue are totally corny, Anchors Aweigh is truly a frothy blast—it’s exactly the kind of film that comes to mind when I think of classic Hollywood. A vivacious affair, director George Sidney keeps everything about it big: the sets, the songs, the dance numbers. I was particularly taken by one sequence involving Kelly and various animated figures—it culminates in an awesome song-and-dance with none other than Jerry Mouse of Tom and Jerry cartoons. Flawless!

The whole spectacle is tied up in an amazing Technicolor bow; Charles Boyle and Robert Planck’s color palette is gorgeous, and seeing it on a nitrate print literally left me breathless. From a sensory perspective, Anchors Aweigh was hands down my favorite film at this year’s Nitrate Picture Show.

As a side note, I must confess that one thing threw me for a loop: Kelly and Sinatra (and Grayson, for that matter) are young and beautiful here—not the old timers I’m accustomed to seeing having grown up when I did. They’re actually hot, even by today’s standards. Kelly upstages Sinatra throughout the entire film, which I found bizarre and quite amusing.