After a chance meeting with a former professor, two starving filmmakers (David Pareja and Daniel Pérez Prada) sign on to a mysterious project knowing nothing about it. Imagine their shock and horror when they realize they’re pegged to film an execution for ISIS.

Writer and director Pablo Vara has a wicked, irreverent, witty and actually brave sense of humor that I love. It’s exactly what we need right now. 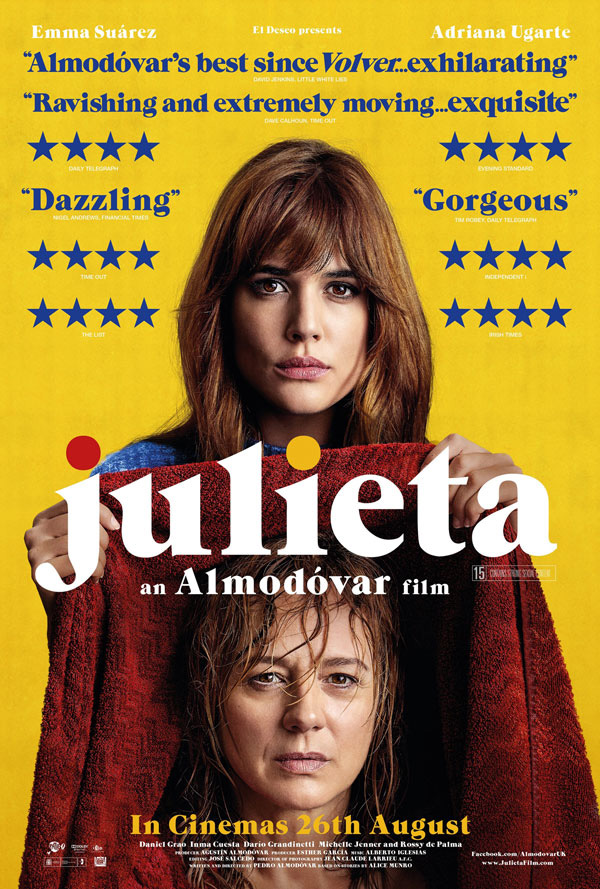 Pedro Almodóvar has his own voice and his own vision, and he’s stayed true to both from the beginnning of his career. He’s an incredible story teller with no shortage of stories to tell; in fact, he once said that he “can make a thousand different movies about the same subject” (https://www.brainyquote.com/quotes/quotes/p/pedroalmod587571.html). His frank treatment of sexuality is as bold as his visual style, and his characters are all memorable. His plots are intricate, loaded with twists and turns and weird things that throw in a wrench that takes the whole thing somewhere you never saw coming. He’s a master of exaggeration—it works just as well in his comedy as it does in his melodrama.

Julieta, Almodóvar’s current film—his twentieth feature—is no exception. Like most of his movies, particularly his post-millennial work, this one centers on women. Inspired by three short stories (“Chance”, “Soon,” and “Silence”) from from Alice Munro’s 2004 book Runaway, Julieta is, in simplest terms, the story of one woman’s search for her estranged daughter. There’s a lot more to it, of course, and Almodóvar slowly reveals it all, layer by layer.

Julieta (Emma Suárez) is a middle-aged woman who lives in Madrid with her boyfriend, Lorenzo (Darío Grandinetti). They’re packing to move to Portugal. Julieta has a secret: she has a daughter, Antiá, who checked out of her life more than a decade ago. She happens to run into Beatriz (Michelle Jenner), an old friend of Antiá, on the street. Beatriz gives Julieta some small information about Antiá, prompting Julieta to drop all plans in the hope of her daughter returning. She begins writing a journal, which turns into a flashback that tells us what happened.

Some 30 years before, young Julieta (Adriana Ugarte) meets scruffy fisherman Xoan (Daniel Grao) on a train. He’s married, but his wife is in a coma. He knocks up Julieta, who receives a letter from him and visits him at his home in a small Spanish fishing town. They decide to raise Antiá together there. When Antiá (Priscilla Delgado) is a teen and away at camp, Julieta and Xoan have a fight that leads to disaster. Julieta doesn’t tell Antiá everything, and it comes back to bite her.

Nothing by Almodóvar ever sucks, but I’ve found his work to be up and down after All About My Mother. It’s to be expected from an artist with a long career, Madonna being a good example. His last project, 2013’s I’m So Excited, was fun but certainly not his most compelling. Julieta, however, is solid—I say it’s his finest hour and a half since Volver. It’s not a light film—it’s an elegant, emotional slow burner that deals with regret, omission, and forgiveness. Ugarte and Grao are both hot, and they have a palpable chemistry. Casting Rossy De Palma as Xoan’s longtime passive-aggressive housekeeper is a nice touch.

I love a Latin melodrama, and The Bride definitely delivers. Adapted from Federico García Lorca’s 1933 tragedy Blood Wedding, it has all the elements of a telenovela: hopelessly beautiful characters with secrets and family drama, caught in a torrid love triangle that comes to a catastrophic head at a wedding.

The Bride (Imma Cuesta) has been involved with both the Groom (Asier Etxeandia) and Leonardo Felix (Álex García)—the sole character with a name—since the three were kids. She has a past with hunky Leonardo, who left her to marry her cousin (Leticia Dolera). By circumstances not entirely clear in the film, the Bride ended up with the Groom and is marrying him for less than noble reasons. Woefully, the Bride and Leonardo are still into each other. An ever-present apparition (María Alfonsa Rosso) warns the Bride early on not to marry the Groom if she doesn’t love him. Leonardo and his wife (and their baby) attend the wedding, and shit unravels.

Director Paula Ortiz makes some interesting choices. She’s coy about time and place, casually throwing together cars and clothes from various decades of the first half of the Twentieth Century while nothing appears to be powered by electricity. Leonardo gets around almost entirely on horse. The dusty vacant desert setting evokes an old Western film, though it could just as easily be the Middle East or Mars as Turkey (where The Bride actually was filmed). The time sequence is out of order, jumping back and forth between past and present. The whole thing moves like a dance, which I took to be a kind of nod to García Lorca’s poetry.

The Bride has its problems, though. The scenes of the Bride’s hallucinations are pretty—lots of floating glass, ice-like daggers, and a big white moon—but they’re distractingly cheesy. The opening scene, which is actually the end of the story, comes off as superfluous; in fact, the time-jumping mechanism doesn’t add a thing. Worse, Ortiz seems to sacrifice depth for decoration. I haven’t seen or read Blood Wedding, but I’m familiar with García Lorca’s work. The Bride is dramatic but superficial—the symbolism is there, but it only hints at the weighty themes García Lorca explored. The focus is clearly on the story—not what’s behind it. So much more could have been said here: I see glimmers of statements on gender, class, mental illness, self-will. Ni modo.