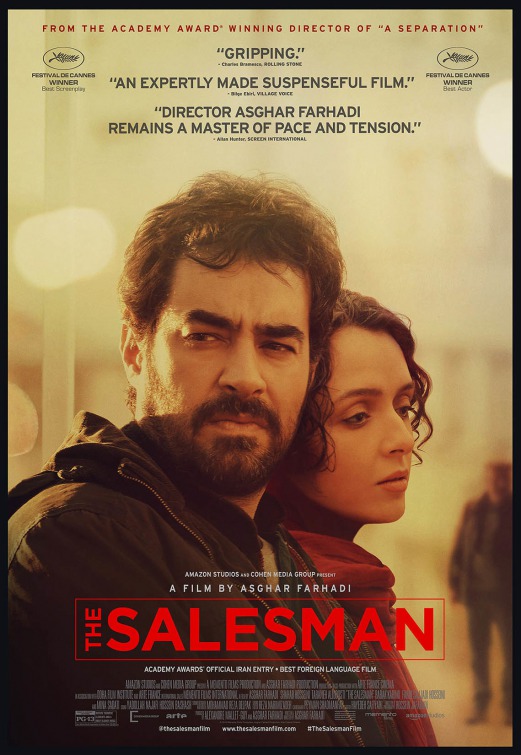 Asghar Farhadi’s The Salesman [Forušande] [فروشنده] is a marvelously dark and brooding study of a married couple that shifts smoothly from a domestic crisis drama to a revenge flick. His approach is a lot more subtle than one an American director might take, but this is precisely what makes The Salesman so satisfying.

While working out the finishing touches of a production of Arthur Miller’s Death of a Salesman in which they play the Lomans, community actors Emad (Shahab Hosseini) and Rana (Taraneh Alidoosti) are forced out of their apartment just days before the play opens when a construction mishap next door weakens the building’s foundation. The cracks in the walls become a metaphor for what’s about to happen to their relatively peaceful marriage.

A fellow cast member, Babak (Babak Karimi), sets them up in temporary digs, a recently and hastily vacated apartment that still contains the previous tenant’s belongings: furniture, bedding, dresses, tons of high heel shoes, a kid’s bike. One night when she’s home alone, a stranger attacks Rana in the shower. She can’t identify him, and she doesn’t want to go to the police. She won’t even say exactly what happened.

Rana starts to go off the deep end; the more unsafe she feels, the less secure Emad is in his own ego. He stews as he pieces together what might have transpired. A set of keys and a delivery truck parked on the street seems like a promising lead to tracking down the stranger, which becomes something of an obsession for Emad.

Farhadi has a straightforward, minimal style. Although he draws a few parallels to Death of a Salesman, he doesn’t beat us over the head with them. He does a nice job dropping us into the story and letting us figure out what he’s getting at. He has a lot to say about male aggression, turning the tables from Rana as the victim to Emad—his masculinity takes a beating as the film progresses.

Single mother Nahid (Sareh Bayat) is kind of a mess. She works a menial job as a typist. She can’t manage money to save her life. Her prepubescent son, Amir Reza (Milad Hasan Pour) is getting out of control. Her no good gambling drug addict ex-husband, Ahmad (Navid Mohammad Zadeh) keeps professing his love two years after their divorce. Mas’ood (Pejman Bazeghi), whom she dates on the sly, is a man of means and wants to marry her. However, her divorce decree grants Ahmad full custody of Amir Reza if she remarries. To top it all off, she’s developing a nasty case of some upper extremity affliction: carpal tunnel syndrome, tendonitis, deQuervain’s syndrome, whatever. She’s over it all.

With echoes of Alice Doesn’t Live Here Anymore, Nahid might sound like it has all the makings of a comedy. It’s not– though it does have a sense of humor. Introducing me to the concept of “temporary marriage,” it explores cultural stigma in a way I haven’t seen before. Ahmad is vice and Mas’ood is virtue, neither of which particularly appeals to Nahid. Bayat plays her as sympathetic yet flawed– she’s no heroine, and we don’t know for sure whether she’s any better off at the end than she was at the beginning of this film. But one thing is clear: she wants to live on her own terms in a society that doesn’t make that easy for her to do so. Nahid also shows Iran how I don’t picture it: cold, wet, and grey.