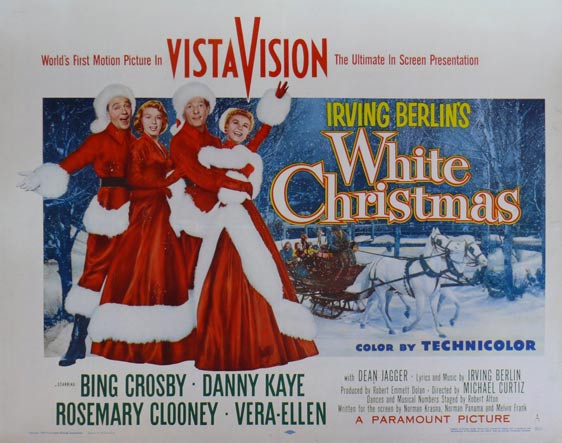 “May your days be merry and bright; and may all your Christmases be white!”

I’ve never heard anyone — not even my grandparents — call White Christmas their favorite movie. Nonetheless, as corny holiday adventure romantic comedies go, it’s a holiday treat that can’t be beat. This year, we caught a double feature (White Christmas and It’s a Wonderful Life) complete with live piano, carols, Yuletide shorts, and Santa!

White Christmas follows Captain Bob Wallace (Bing Crosby) and Private Phil Davis (Danny Kaye), members of the 151st Division of the U.S. Army, from a World War II battlefield where the latter sacrifices his shoulder to save the former, into their successful postwar Broadway partnership likely borne out of a sense of obligation, to a tiny Vermont inn where they both fall in love. Not with each other — though that would be interesting. No, with two nightclub singers they meet in Miami, “Sisters” Betty (Rosemary Clooney) and Judy Haynes (Vera-Ellen, who’s visibly anorexic).

God help these misters! It’s love at first sight for Phil and Judy, but not for Bob and Betty (which amusingly are my parents’ names). The gals have to take off for a Christmas performance they booked in Vermont. Not wanting her to leave, Phil finagles a sneaky way to extend his time with Judy — much to Bob’s dismay. A startlingly sad surprise awaits them in Vermont, exactly where the gals are performing. It seems it will take a Christmas miracle to turn things around, but Bob and Betty and Phil and Judy just might pull it off — with a little help from their friends in the 151st Division.

Irving Berlin’s music is classic: “Love, You Didn’t Do Right by Me,” “Gee, I Wish I Was Back in the Army,” “Sisters,” and — duh! — the title track, a huge hit that was already a decade old by the time the movie was made. The single “White Christmas” holds the Guinness World Record as the top selling record of all time (https://www.billboard.com/articles/columns/chart-beat/8022047/white-christmas-bing-crosby-number-1-rewinding-charts). Title of this movie explained.