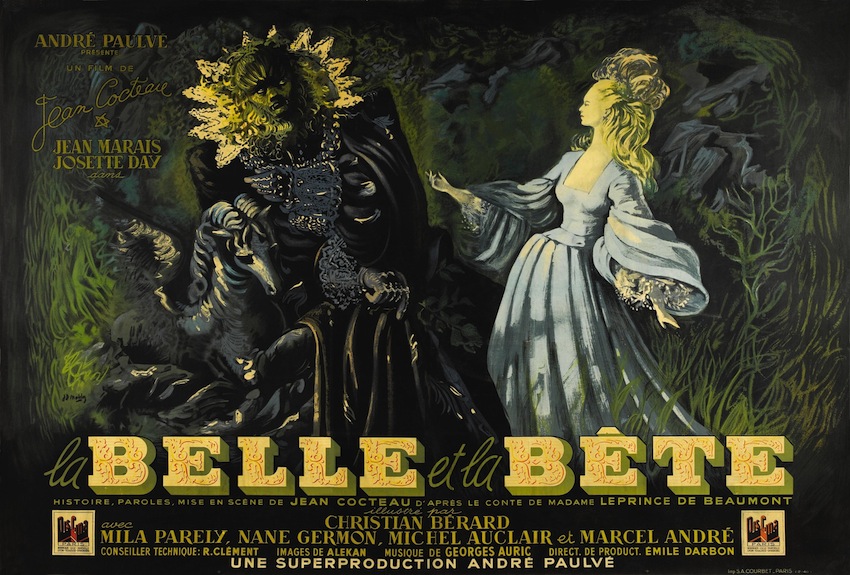 “I ask of you a little of this childlike simplicity, and, to bring us luck, let me speak four truly magic words, childhood’s open sesame: Once upon a time…”

I’m familiar with Jean Cocteau. Somehow, I never saw one of his films until this sold out Sunday matinee screening of La belle et la bête, a story I know well and probably would have passed on but for the fact that he directed it.

Belle (Josette Day) loves her father (Marcel André), a merchant who twice loses a fortune, so much that she steps in to save him when he angers the Beast (Jean Marais) by picking a rose from his garden to bring home to her. The Beast abandons his plan to kill her to avenge the sin of her father as soon as he sees her — he’s smitten. He’s so ugly, though, that Belle faints when she sees him.

Belle wakes up inside a room in his castle, where the Beast executes an alternate plan: every night at dinner he will ask her to marry him. As it turns out, he’s filthy rich and wants Belle to be his queen. She develops a soft spot for him as time goes on, but Belle’s answer is always the same: no. Apparently, she doesn’t love him.

When she learns that her father is dying, the Beast allows Belle to visit her family. He gives her a magic glove that transports her wherever she wants to go and the key to his fortune. Realizing how rich the Beast really is, Belle’s conniving siblings, sisters Adélaïde (Nane Germon) and Felicie (Mila Parély) and brother Ludovic (Michel Auclair), take Belle on a treacherous turn.

Wow! Entrancing and mesmerizing, Cocteau’s La belle et la bête is an impressively cool film, far from the family-oriented Disney musical version that seems to be the default. At times grotesque, surreal, and very imaginative, it’s a darker telling of Jeanne-Marie Leprince de Beaumont’s 18th century classic adaptation of Gabrielle-Suzanne Barbot de Villeneuve’s original fable (I never thought about where the story came from until I wrote this entry).

The lovely Day is perfect as Belle: kind yet knowing, she plays her character as something of a girl next door fatale. Marais evokes compassion for his character, even with a mask covering his face. Lucien Carré and René Moulaert’s otherworldly sets and Pierre Cardin’s Victorian wardrobe are both tailor made for Henri Alekan’s grizzled, shadowy, and hard black and white cinematography. Something about the time when this came out — immediately after WWII — enhances the overall eerie feel of this film. I can’t come up with enough superlatives to describe it.

Cocteau is buried beneath the floor of the Chapelle Saint-Blaise des Simples in Milly-la-Forêt (http://www.chapelle-saint-blaise.org/html/en/home/home.php). A plaque marking his gravesite states, “Je reste avec vous” (“I stay with you”). It’s a fitting epitaph for the director of this particular version of La Belle et la Bete, which will stay with me. It’s a haunting beauty to behold.

But where are the clowns? Send in the clowns. Okay, don’t bother, two of them are in this short by the great French director Jean-Pierre Melville. 24 Hours in the Life of a Clown [Vingt-quatre heures de la vie d’un clown] is just that: a day in the life of Beby, a clown who lives in Montmarte. A multitude of fedoras costar.

In between performances at Circus Medrano, Beby walks the streets of Paris, sleeps with his little dog (but not his wife), reads fan mail, drinks at a café, and puts on makeup with his friend and fellow clown Maïss. Interestingly enough, this is not the only short to feature Maïss, who later appeared in Rodolphe Marcilly’s Centaures et pastiche in 1953.

24 Hours in the Life of a Clown holds historical and artistic significance as Melville’s first film. It highlights his style, albeit in its infancy, playing with light and dark. His approach is tongue in cheek, and his “narration” (this is not a “talkie”) strongly suggests Melville knew well that his hoary little film is silly.

Still, it’s interesting if only for the scenery, all 1940s drab and threadbare, and the documentary feel of it. Beby’s apartment reminds me of the one in Eraserhead. 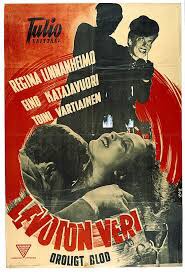 The third Nitrate Picture Show ended on a high note with an unidentified film (the “blind date”) that turned out to be Finnish director Teuvo Tulio’s gloriously insane melodrama Restless Blood [Levoton veri]. I never heard of the director, the film, or anyone in it. I adore this silly spectacle, which straddles the line between soap opera and Saturday morning cartoon.

The story is a love triangle involving two sisters, elder Sylvi (Regina Linnanheimo) and younger Outi (Toini Vartiainen), and Valter Sora (Eino Katajavuori), a burly doctor in their small town. Outi is his patient—she broke her leg—but Sylvi snags him as a husband. Not that Outi has no chance—she does, which she proves when she returns after disappearing, heartbroken, for a few years. Oh yeah—Sylvi goes blind in the meantime: she drinks poison.

Written by Tulio, Linnanheimo, and Nisse Hirn, the script is prime time dynamite. And fresh even by today’s standards. Forget the Ewings and the Carringtons—loaded with sibling rivalry and drama, Restless Blood is the raw and bitter real deal.

Here’s Sylvi driving like a maniac, “blinded” by rage: 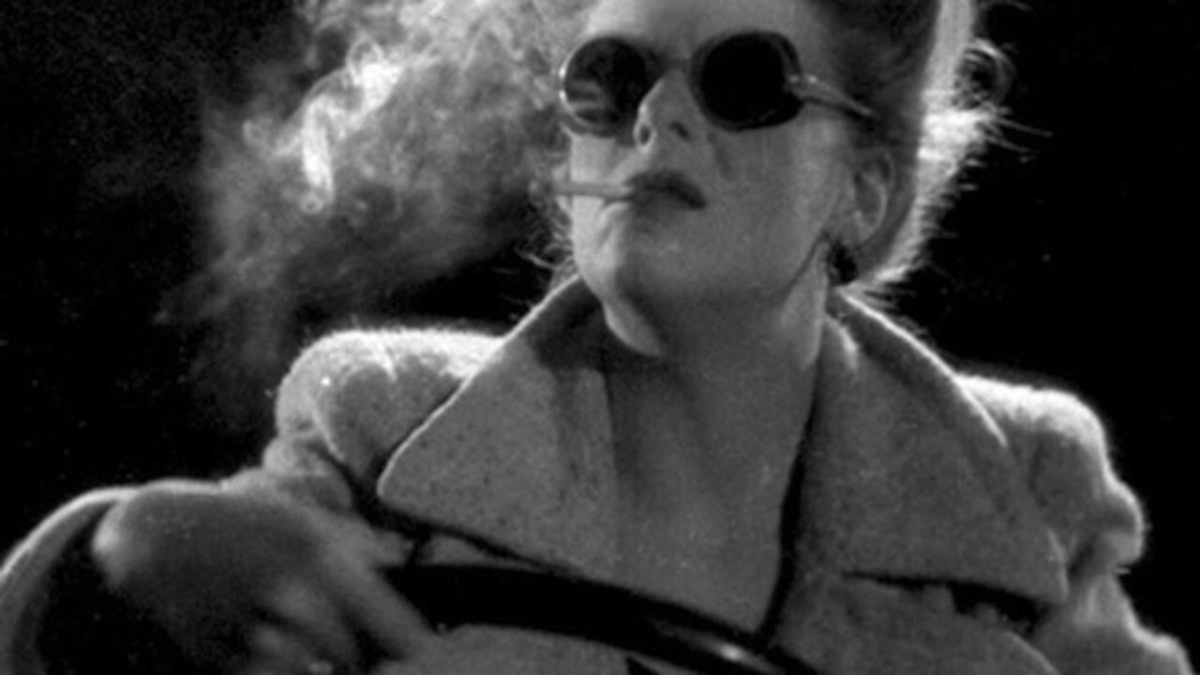 Come on! That coat, those glasses, that pissed off vengeful smoke! It’s perfect. When we see that Sylvi gets what’s going on between her husband and her sister, wow. Just…wow. The story is thin, but the actors put a lot into it. Bonus: Pentti Lintonen’s cinematography is brilliant. Seeing it on a nitrate print was the icing on the cake—totally worth the cinematic fat and calories.

Restless Blood is not the best film screened at this year’s Nitrate Picture Show, but I dare say it’s the most interesting. I’m dying to see more by Tulio—too bad his work is not easily (or cheaply) accessible.