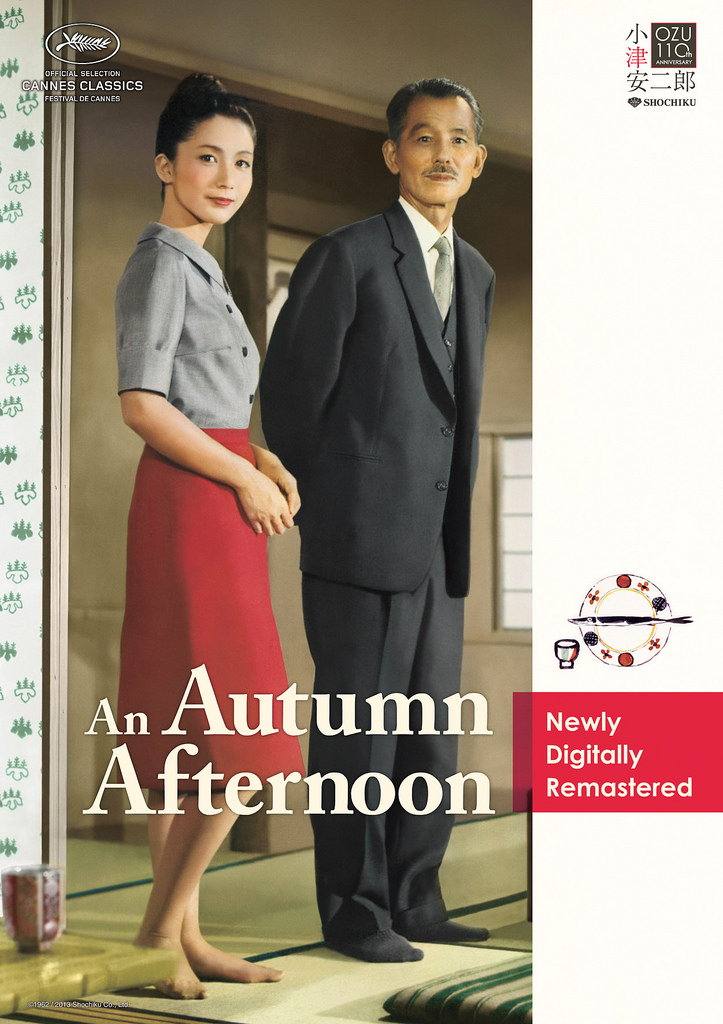 “We are alone in life. Always alone.”

If one film perfectly captures what solitude, melancholia, and acceptance of things for what they are feels like, it has to be Yasujirō Ozu’s gorgeous and quietly contemplative An Autumn Afternoon [秋刀魚の味]. Framing death and loneliness in such metaphors as war, alcohol, marriage, aging, and the global impact of postwar America, this one packs a punch that hits like a feather but still leaves a mark.

Shūhei Hirayama (Chishū Ryū) is a middle aged man who emits an air of defeat, as if life has disappointed him. A widower with three adult kids, only one of them, elder son Kōichi (Keiji Sada), is married — and he and his wife (Mariko Okada) have some messed up priorities, especially when it comes to money. No one seems interested in daughter Michiko (Shima Iwashita). Who knows what the deal is with younger son Kazuo (Shin’ichirō Mikami)? Hirayama bides his time between home, work, and dining with former classmates Kawai (Nobuo Nakamura), Horie (Ryūji Kita), Sugai (Tsūzai Sugawara), and Watanabe (Masao Oda) at Sugai’s restaurant. They mostly drink sake, reminisce, and make fun of each other. Horie’s new wife, who’s much younger than he, provides ample material for discussion.

A former professor, Sakuma (Eijirō Tōno), comes to dinner one night. He has way too much to drink. Hirayama and Kawai drive him home, where they meet his spinster daughter Tomoko (Haruko Sugimura). They learn he’s not doing well, operating a jank noodle joint in a low rent neighborhood to make ends meet. This gets Hirayama thinking about his own family and his obligations there.

An Autumn Afternoon is a film you see to experience its mood — not to be entertained. The narrative is engaging and plotted nicely, but it’s only half the story. Ozu uses composition to convey his points as much he uses words and characters. Long shots. Hallways, stairs, and windows. Army green and brown hues, a very ’60s sitcom look. Colors, solids, patterns, and textures. All of this is just as important as the narrative. More important, actually.

Roger Ebert offered the best description of Ozu I’ve seen to date: “He is a man with a profound understanding of human nature, about which he makes no dramatic statements. We are here, we hope to be happy, we want to do well, we are locked within our aloneness, life goes on.” (http://www.rogerebert.com/reviews/great-movie-an-autumn-afternoon-1962). Amen. This is the essence of An Autumn Afternoon, and it’s beautiful.

“I’ve noticed that when people remember Lawrence of Arabia, they don’t talk about the details of the plot. They get a certain look in their eye, as if they are remembering the whole experience, and have never quite been able to put it into words.”

Lawrence of Arabia is an epic if ever there ever was one: a biopic of a bygone era’s famous and handsome man—author T.E. Lawrence (Peter O’Toole)—on a wartime adventure to accomplish an important but impossible task in a rugged, foreign land. His first meeting with Sherif Ali (Omar Sharif) does not go well, creating a certain tension that appears to stand in the way. The drama! Lawrence even has an English accent. Uniquely, though, this is a rather low-key epic: most of the set is a vast, sprawling desert, and it’s the little events that produce big results.

Director David Lean infused a major gay subtext. O’Toole is strikingly beautiful; in fact, Noel Coward observed that if O’Toole had been any prettier, the film would have to be called Florence of Arabia (http://www.bbc.com/news/entertainment-arts-25393557). O’Toole plays Lawrence with a distinct diva component. There’s a hint of something more than an employment arrangement between Lawrence and some servants and an Arab soldier or two. There’s also a weird scene where Lawrence is captured by muscled Turks and brought shirtless before an older, smarmy Bey (José Ferrer) with obvious designs on him; when Lawrence spurns his advances, the Bey has him beaten with whips. Lawrence doesn’t seem too bothered by the beating. The palace looks like a tawdry bathhouse.

What will probably stay with me above all else is F.A. Young’s cinematography, which is arresting and haunting. I definitely want a camel now that I’ve seen this.

In 1991, the United States Library of Congress deemed Lawrence of Arabia “culturally, historically, or aesthetically significant” and selected it for preservation in the National Film Registry (https://www.loc.gov/programs/national-film-preservation-board/film-registry/complete-national-film-registry-listing/).