This theatrical cut of director Sion Sono’s Amazon Prime miniseries Tokyo Vampire Hotel [東京ヴァンパイアホテル] (http://www.indiewire.com/2017/04/tokyo-vampire-hotel-sion-sono-amazon-1201808369/) is a fast-paced stylish and colorful bloodbath, something that wouldn’t be out of place in Quentin Tarantino’s oeuvre.

Manami (Tomite Ami) is a nice girl who shares a tiny apartment with her boyfriend (Saito Takumi) in Tokyo. Just after she arrives for dinner with her friends on the evening of her 22nd birthday, a crazy gun-toting assassin (Shoko Nakagawa) in a fuzzy pink mink shows up and takes out everyone in the restaurant — except Manami, whom she came to kidnap.

Manami flees, only to be picked up by another kidnapper, the mysterious K (Kaho). K in not so may words explains that Manami is a pawn in a war between two vampire clans, the Draculas and the Corvins, who have been enemies for centuries. Unbeknownst to Manami, she’s the target of a worldwide vampire hunt. K takes her to the glamorous Tokyo Vampire Hotel, which is run by a creepy geisha empress (Adachi Yumi) who needs blood.

The end of civilization is coming, but the empress has a plan: use the hotel to trap a healthy supply of humans to serve as food. Things don’t pan out as planned when the humans figure out what’s happening and the Draculas show up to crash the party.

This photo sums up what you’re getting into here: 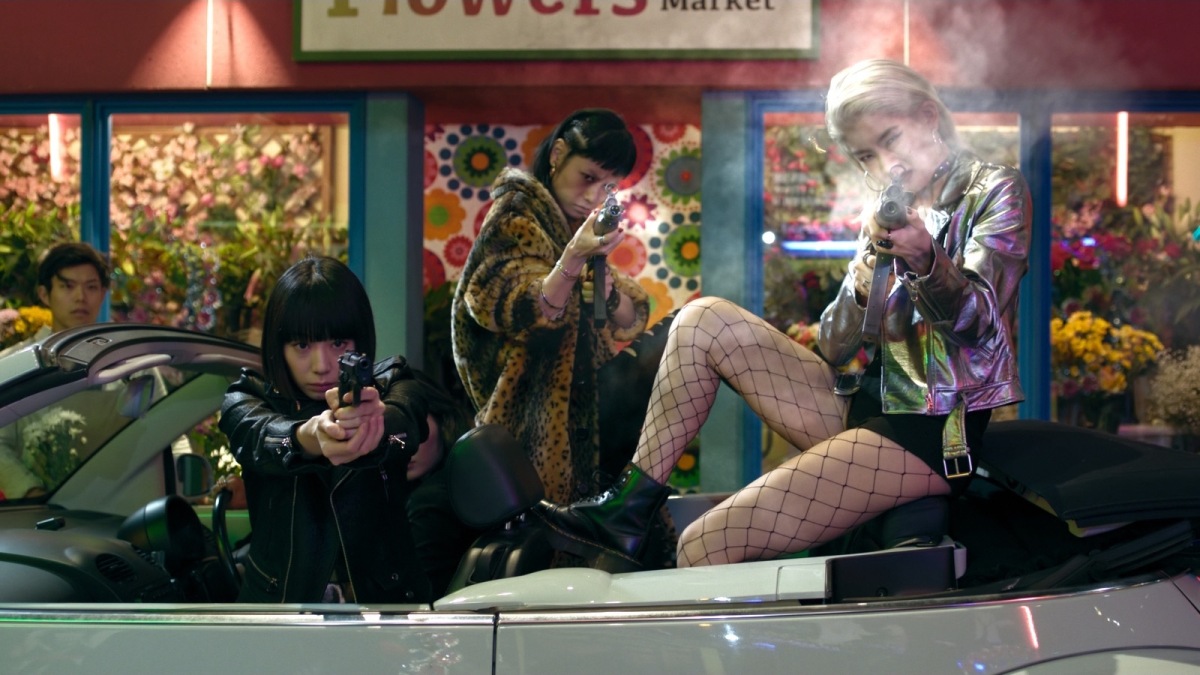 Tokyo Vampire Hotel is quirky, sexy, lavish, and fun. Sono serves up an imaginative feast of dazzling eye candy and nonstop action. His use of Christian symbols adds a nice touch. The sets are fantastic, and the action moves from the streets of Tokyo at night to inside the hotel to Bran Castle in Transylvania, and back. The editing works to make nine episodes flow seamlessly into a feature length film. However, the story wears thin after a little while, and it can’t sustain the interest I started out with. The gore gets old, too. The length, nearly two and a half hours, is a problem. It demonstrates why Tokyo Vampire Hotel is probably better in smaller doses.

Funeral Parade of Roses [薔薇の葬列] is an intriguing film for a few reasons. Clearly influenced by the French New Wave, writer and director Toshio Matsumoto comes up with something simultaneously ordinary yet avant-garde, very much a product of its time yet years ahead. It’s extraordinarily cool.

Structured as a movie within a movie, Funeral Parade of Roses follows Tokyo “gay boy” Eddie (Pîtâ a.k.a. Peter) through his many exploits as a young transvestite immersed in the underground club scene. He might even be a hooker. Meanwhile, he’s carrying on a secret affair with Jimi (Yoshimi Jô), the boyfriend of club elder statesperson and fellow gay boy Leda (Osamu Ogasawara). Leda is onto them. Oh, the drama it creates!

While all this is going on, a camera crew records Eddie as though this were The Real World or Truth or Dare.

As Eddie ponders who he is — and looks to alcohol, group sex, drugs, and lots of attention from others for answers — Matsumoto explores “queer identity” through him. He intersperses interviews, flashbacks, episodes with Eddie’s mother (Emiko Azuma), and even a musical diversion or two to offer clues. A crazy subplot develops, and it references Oedipus in a tacky and sad but clever way.

Clumsy in its exploration of “gay life” and downright disturbing at points, Funeral Parade of Roses is nonetheless fun to watch. Shot in gorgeous black and white, it has an otherworldly feel. When it’s not nihilistic, it’s kitschy and entertaining — almost in a nascent John Waters way, just not quite as rough. The clothes are mod. The music is heavy on classical. The ending, sudden and bloody, is really messed up.

I’m not sure what exactly Matsumoto is saying here — a lot is open to interpretation — or that I agree with him. Either way, I enjoyed the journey.

“We are alone in life. Always alone.”

If one film perfectly captures what solitude, melancholia, and acceptance of things for what they are feels like, it has to be Yasujirō Ozu’s gorgeous and quietly contemplative An Autumn Afternoon [秋刀魚の味]. Framing death and loneliness in such metaphors as war, alcohol, marriage, aging, and the global impact of postwar America, this one packs a punch that hits like a feather but still leaves a mark.

Shūhei Hirayama (Chishū Ryū) is a middle aged man who emits an air of defeat, as if life has disappointed him. A widower with three adult kids, only one of them, elder son Kōichi (Keiji Sada), is married — and he and his wife (Mariko Okada) have some messed up priorities, especially when it comes to money. No one seems interested in daughter Michiko (Shima Iwashita). Who knows what the deal is with younger son Kazuo (Shin’ichirō Mikami)? Hirayama bides his time between home, work, and dining with former classmates Kawai (Nobuo Nakamura), Horie (Ryūji Kita), Sugai (Tsūzai Sugawara), and Watanabe (Masao Oda) at Sugai’s restaurant. They mostly drink sake, reminisce, and make fun of each other. Horie’s new wife, who’s much younger than he, provides ample material for discussion.

A former professor, Sakuma (Eijirō Tōno), comes to dinner one night. He has way too much to drink. Hirayama and Kawai drive him home, where they meet his spinster daughter Tomoko (Haruko Sugimura). They learn he’s not doing well, operating a jank noodle joint in a low rent neighborhood to make ends meet. This gets Hirayama thinking about his own family and his obligations there.

An Autumn Afternoon is a film you see to experience its mood — not to be entertained. The narrative is engaging and plotted nicely, but it’s only half the story. Ozu uses composition to convey his points as much he uses words and characters. Long shots. Hallways, stairs, and windows. Army green and brown hues, a very ’60s sitcom look. Colors, solids, patterns, and textures. All of this is just as important as the narrative. More important, actually.

Roger Ebert offered the best description of Ozu I’ve seen to date: “He is a man with a profound understanding of human nature, about which he makes no dramatic statements. We are here, we hope to be happy, we want to do well, we are locked within our aloneness, life goes on.” (http://www.rogerebert.com/reviews/great-movie-an-autumn-afternoon-1962). Amen. This is the essence of An Autumn Afternoon, and it’s beautiful.

After a presentation of shorts, the George Eastman Museum kicked off its third annual Nitrate Picture Show with a Japanese drama, Yasujirō Ozu’s quiet and gracefully understated Bakushū [麦秋]. In the context of midcentury Japan, Ozu explores the generational clash between tradition and progress, and both the possibilities and the casualties brought on by the latter. Opening with something that deals with changing values was an interesting choice on multiple levels.

Noriko (Setsuko Hara) lives in postwar Tokyo with her parents, Shūkichi (Ichirō Sugai) and Shige (Chieko Higashiyama); her older brother, physician Kōichi (Chishū Ryū); his wife, Fumiko (Kuniko Miyake); and their two unruly young sons, Minoru (Zen Murase) and Isamu (Isao Shirosawa). Noriko earns her own living as a secretary and contributes to the household, maintaining her own active social life. She seems happy, or at least content. Still, her more conventional family is concerned because she’s 28 years old and still isn’t married.

Noriko is a good sport about her family members’ not-so-subtle reminders, but the heat intensifies when an elderly uncle (Kokuten Kōdō) stays for a visit. Her chauvinistic boss (Shūji Sano) plays matchmaker, introducing her to Mr. Matanabe, a business associate in his 40s (all of his interactions occur off camera, so we never see him). He proposes. Naturally, Noriko’s family pushes her to accept his offer, which she considers even though the prospect doesn’t excite her.

Enter childhood friend, Kenkichi (Hiroshi Nihon’yanagi), who returns to the neighborhood with his daughter. He’s a widow in between job assignments. Noriko suddenly develops her own idea about which path she wants to take, much to the dismay of her family.

Bakushū is not a kinetic film—it’s slow, and the action centers on mundane routine activities like preparing meals, eating, conversing, working, and getting ready for bed. Some of the plot’s significant events aren’t even shown. Ozu favors low angles and wide, distant shots. He keeps the camera pretty still. He doesn’t use a lot of sets. On top of that, it takes some effort to keep track of the many characters.

Admittedly, I found myself zoning out at the beginning. Once I settled into Ozu’s rhythm, though, I got more interested in Bakushū. Some of the plot elements make the story seem slightly ahead of its time, but the core themes are universal. This is a family drama; the family unit ultimately falls apart, but it’s not necessarily a bad thing. The family portrait at the end closes things on a bittersweet note. I sensed more than a nod to the burgeoning westernization of Japanese society.

Bakushū fits nicely into the midcentury films I’ve developed a taste for. I never heard of it or Ozu, but I’ve already looked him up. I’m interested in seeing more of his work. As for this print, it was in all likelihood the very first feature film I’ve ever seen on nitrate (we’re not counting the shorts). The picture was crisp, but I must confess: its quality didn’t wow me like some others I saw after this.

Barcelona, one of my favorite cities, owes much of its color to Antoni Gaudí, whose personal stamp is all over it. With Antonio Gaudí [アントニー・ガウディー], Hiroshi Teshigahara directs a virtual tour of Gaudí’s major and not so major works, getting close up and even inside a few spots one otherwise might never see.

Antonio Gaudí is pretty, artful, perhaps even poetic; but it’s boring. Teshigahara offers no commentary or background on anything other than—surprise!—La Basílica de la Sagrada Família; even then, the narration is two minutes long, if that. A 72-minute moving postcard, Antonio Gaudí amounts to nothing more than an educational film or a tourism video. I’d rather see Gaudí’s work in person.