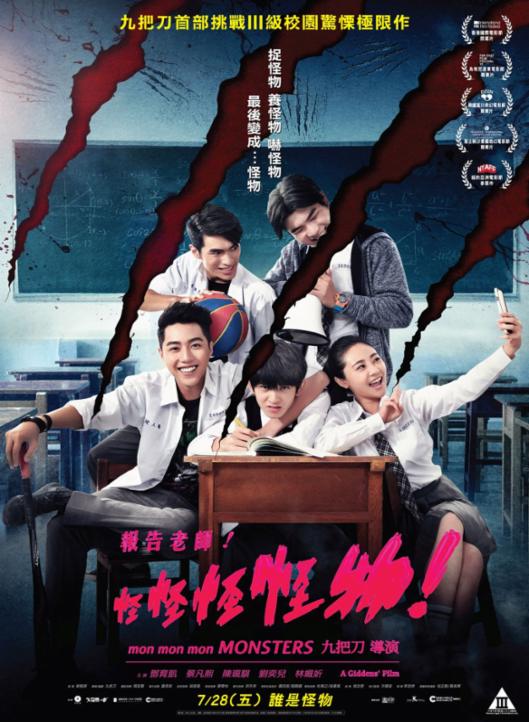 In his latest film, peer pressure horror comedy Mon Mon Mon Monsters [報告老師! 怪怪怪怪物!] [Bào Gào Lǎo Shī! Guài Guài Guài Guài Wù!], writer/director Giddens Ko takes us on a wild ride that leaves us pondering who the real mosters are. He subtly gives us his answer in the title.

High school student Lin Shu-wei (Deng Yu-kai) is a neo maxi zoom dweebie with a masochistic edge. Why else would he tolerate the constant flying bits of paper, chairs pulled out from under him, and general teenage tomfoolery directed at him?

Lin becomes the target of Bully Ren-hao (Kent Tsai), a closet psychopath who relentlessly dreams up new ways to torment him. Ren-hao has two flunkies, Liao Kuo-feng (James Lai) and Yeh Wei-chu (Tao Meng) who do his bidding. Ren-hao’s girlfriend, Wu Si-hua (Bonnie Liang), contributes to the hell — never removing her star-studded headset as she snaps photos with her iPhone.

A pacificst teacher (Carolyn Chen) has an idea to get the boys on common ground: she assigns the four of them to community service feeding senile elderlies at a decrepit old age home that looks like something straight out of Blade Runner. Lin has a bad feeling about it, and he’s right: in the process of robbing an old man, the boys corner and capture a flesh-eating female beast (Lin Pei-hsin) they find roaming around.

They take her to an abandoned recreation center, where they chain her up and torture her with light, fire, and starvation. Lin reluctantly goes along with it, but he reaches a point where he either has to put up or shut up. Meanwhile, the beast’s protective and pissed off older sister (Eugenie Liu) is looking for her. This is where Lin is put to the test: does he have any character, and can he stay true to it?

Despite inconsistent pacing, Mon Mon Mon Monsters is overall engaging. Ko has something to say about the moral fabric of today’s youth, but he says it in a mostly lighthearted way. The acting is solid all around, which is pretty amazing for a slasher flick. The “monsters” are sweet in their own way. It’s smart to show them right off the bat rather than let us wonder what they look like; they come off as more human than the teenagers in this movie.

The special effects are pretty good, and the way Ko plays with light and color is downright spectacular. Quite a few scenes here are magnificent even if they’re cheesy and gory (that scene on the bus is fabulous, as are the scene where the teacher ignites in the gym and pretty much any of the scenes in the recreation center). Underneath all the blood and hate is a truth about the social ladder.

Just in time for summer, Didi’s Dreams [吃吃的愛] is the cinematic equivalent of a glass of lemonade: cool, refreshing, and sweet with a slightly tart afterburn, it’s a real treat on a hot day. Too bad its North American run is an extremely limited one.

An intentionally fluffy melodrama, the story follows the misadventures of its titular character, Didi (Dee Hsu), a hungry young twenty-something wannabe actress. Determined to catch her big break, she auditions for anything: a probiotic commercial, a model on a QVC-type shopping network, an extra in a zombie flick, a female wrestler. She’s not exactly picky, calculated, or disciplined about getting there—she just wants to be famous. To her credit—and the dismay of many a producer and director—she’s earnest in her efforts.

Didi’s boyfriend, Xiao-kou (Scar Kim), literally rolls along with her, carting her around on his scooter. He proves to be her rock when she receives devastating news from her doctor (Chuan-cheng Tao).

Didi has a sister, Lingling (Lin Chi-lin), who also happens to be an actress—a famous one like Didi aims to be. Some bad blood between them after their mother died, shown mainly through flashbacks, caused a falling out. As a result, they haven’t spoken in years. A scandal, a TV talk show, and a twist of fate (or maybe just a publicity stunt) bring them together—cast as sisters in a major motion picture.

While all this goes on, Didi has a recurring dream about Chunmei (also played by Hsu), her psychic alterego who runs an interplanetary noodle shop in, um, outer space. Her clientele is a creature cantina of sorts. Chunmei can’t seem to get over losing her love, and it’s affecting her broth. One particular customer, an astronaut (Zifeng Li), holds her attention. While not immediately clear, a connection to Didi comes through as the story progresses.

Director Kevin Tsai keeps it mostly light here, serving up a tangy mix of comedy, tragedy, and fantasy in a wink-wink soap opera way—more Telemundo than Dynasty. Tsai and Ming-Yi Liao’s screenplay is not at all deep, but it’s packed with surprises despite a few sappy clichés. I like where the narrative goes.

Visually, Didi’s Dreams is a colorful stunner, loaded with cute faces, vivid imagery, snazzy sets, and cool costumes. Jing-Pin Yu’s cinematography glistens; it’s slick without going overboard. I can’t imagine enjoying this film as much without it. It all looks great on the big screen—my favorite scenes are at the noodle shop and that probiotic commercial.

Yes, there are flaws. However, the whole thing is put together so well, I easily forgave them. I could’ve done without the remake of “Moon River” from Breakfast at Tiffany’s over the closing credits, but the analogy is apt. Didi’s Dreams is a fun little sparkler that caught me off guard.

We all have demons, but not quite like those of the Laundryman (Joseph Chang). He is an anonymous hitman with a serious problem on his hands: the ghosts of his victims are following him around everywhere, rattling him and interfering with his job—which is done behind the scenes of a dry cleaning and laundry front. He enlists the help of funky, sassy medium Lin Hsiang (Wan Qian) to rid him of his demons, upsetting his boss, the icy hot femme fatale ex-psychiatrist A-gu (Sonia Sui), in the process. Danger, Laundryman, danger!

A dark comedy romance action thriller with the supernatural thrown in, I loved The Laundryman—and it has so much to love. It’s fun, colorful, and full of great energy. The story and the characters are clever and wonderfully strange, yet somehow plausible despite pushing the limits of ‘suspension of disbelief.’ The cinematography is sharp. The sets are loaded with delightfully tacky details without distracting from the action. Director Lee Chung plays with gender roles and archetypes, making his women fierce and the Laundryman the recipient of unwanted sexual advances. It all adds up to a ghastly good time: never cheesy or boring, The Laundryman is packed with action, suspense, and subtle humor that kept me through the end.