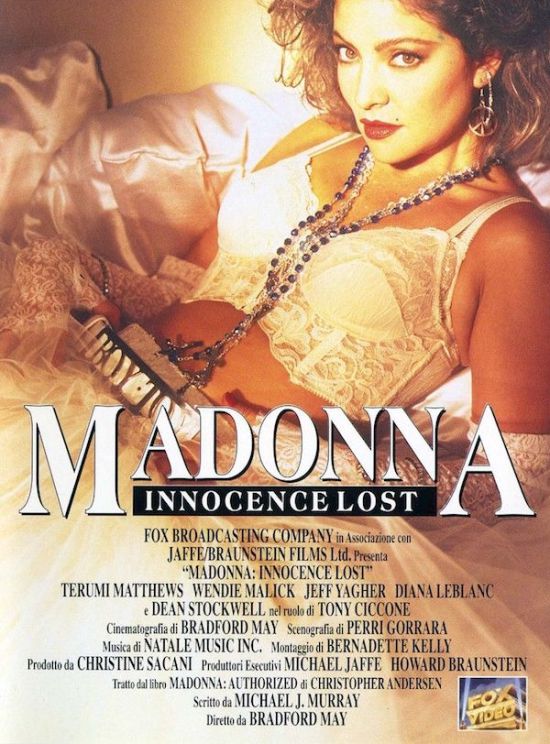 “I take what I need and I move on. And if people can’t move with me, well then I’m sorry.”

Wow, I completely forgot about this tawdry exposé made for TV — American TV, which is even worse — chronicling Madonna’s early years in New York City. It aired on Fox in the mid-nineties, and it’s actually amazing only for how awful it is. All the stops are pulled out, and it’s a trainwreck: the overriding theme is that Madonna is an ambitious whore. OK, National Enquirer.

Based on Christopher Andersen’s 1991 biography — totally unauthorized, I add — Michael J. Murray’s script is just plain sad. Some of it is remarkably accurate, but some of it…not so much. I recognize every single interview where he culled material to tell the Material Girl’s story — in Time, Rolling Stone, Vanity Fair, Interview, and a few other magazines. He doesn’t just lift background, he lifts dialogue. Verbatim. That opening monologue is straight from a letter to Stephen Jon Lewicki in which she begs to appear in his softcore film A Certain Sacrifice. The characters are all real people even if their names are changed: her donut shop manager (Kenner Ames), Dan Gilroy (Jeff Yagher), Camille Barbone (Wendie Malick), Mark Kamins (Mitch Roth), Seymour Stein (Don Francks), frequent collaborator Steve Bray (Ephraim Hylton), and last but not least her father, Silvio Ciccone (Dean Stockwell).

I’m mildly impressed that her mother (Jenny Parsons), shown entirely in black and white flashbacks, even comes up. And the many guys she slept with, some of them with a purpose. And that gumcracking? Brilliant!

Terumi Matthews plays a young Madonna, and I’ll give her this: she nails the megastar’s ideosynchrocies perfectly! However, the vignettes and Catholic imagery stolen straight from the video for “Oh Father” are so lame that I feel like I should say a rosary after seeing this. So should you. Don’t even get me started on where this story starts — the first MTV Video Music Awards? Really? She was already on her second album by then.

In any event, Madonna: Innocence Lost is not flattering, but it’s still a hoot. It plays on Madonna’s bad side, like “Blond Ambition” is a bad thing. The problem is, this approach fails when you’re dealing with someone who used that very name for one of her biggest tours. Shocking? Fuck no.

I doubt Crowther meant “gay” in the current sense of the word, but he certainly wasn’t wrong either way: between all the singing, dancing, handsome sailors in tight pants, and a very young and wide-eyed Frank Sinatra acting out a creepy attachment to Gene Kelly, the only thing that could make Anchors Aweigh any gayer would be an appearance by Judy Garland. Or a raunchy sex scene with all those sailors and the admiral who, in one number (“We Hate to Leave”), said he would beat them with a whip. I half expected and kinda wanted it to happen, but of course it didn’t. Oh well.

As a reward for their bravery, Navy seamen Joe Brady (Kelly) and Clarence Doolittle (Sinatra) are given a four-day leave in Hollywood. Joe plans to hook up with his dame, Lola. After stalking him on the streets of Los Angeles, sweet and naive ex choir boy Clarence asks the apparently more experienced Joe to teach him how to meet girls.

Enter Donald (Dean Stockwell, whom most of us know as a middle-aged man from his many ’80s and ’90s movies), a little tyke who’s running away from home to join the navy. Our boys take him home, where Donald lives with his Aunt Susie (Kathryn Grayson), a nice girl trying to get into the movie industry—if only she could catch a break. Clarence immediately falls head over heels and enlists Joe’s assistance in wooing her, which provides the story here.

Even though (and probably because) the characters, plot, and dialogue are totally corny, Anchors Aweigh is truly a frothy blast—it’s exactly the kind of film that comes to mind when I think of classic Hollywood. A vivacious affair, director George Sidney keeps everything about it big: the sets, the songs, the dance numbers. I was particularly taken by one sequence involving Kelly and various animated figures—it culminates in an awesome song-and-dance with none other than Jerry Mouse of Tom and Jerry cartoons. Flawless!

The whole spectacle is tied up in an amazing Technicolor bow; Charles Boyle and Robert Planck’s color palette is gorgeous, and seeing it on a nitrate print literally left me breathless. From a sensory perspective, Anchors Aweigh was hands down my favorite film at this year’s Nitrate Picture Show.

As a side note, I must confess that one thing threw me for a loop: Kelly and Sinatra (and Grayson, for that matter) are young and beautiful here—not the old timers I’m accustomed to seeing having grown up when I did. They’re actually hot, even by today’s standards. Kelly upstages Sinatra throughout the entire film, which I found bizarre and quite amusing.

Who hasn’t seen Blue Velvet? Even though David Lynch was already established by the time it came out, it’s the film that introduced me to him. I saw it once or twice in late high school or early college, definitely on VHS. The River’s Edge was the only comparison I had, and that was a weird film but…not on the same level. I found Blue Velvet totally watchable because it’s very dark, very sexual, very fucking weird, and very voyeuristic.

That was then, this is now: Blue Velvet is still all of those things, but I don’t remember it having the sense of humor it does. It’s curiously funny. It marks the start of Lynch’s style as we know it: not just surreal (he had already done Eraserhead), but macabre and perverted underneath the innocuous and mundane premise. Lynch sets up his narrative in pieces that refer back and forth, like a moving puzzle. It’s brilliant, and it’s a formula that’s served him well.

Blue Velvet starts with a severed ear on the ground, bugs crawling all over it. A local college kid turned stalker (Kyle MacLachlan) proves a bit too curious when his minor obsession with a night club singer (Isabella Rossellini) leads him into a sadomasochistic nightmare that neither he nor we viewers can turn away from. The whole bizarre and sordid story goes full circle back to where it started: that ear.

Dennis Hopper as Frank, the gas-huffing sociopath who ends every sentence with the F-word, colors the mood here. None of it would work, though, without Rossellini’s vulnerability, which is crucial.

Lynch considered Molly Ringwald instead of Laura Dern and Val Kilmer instead of MacLachlan. Thank goodness it happened how it did; what a different film Blue Velvet would have been. For a movie that relies so heavily on nuance, that could’ve ruined Lynch’s career. It didn’t.

I wasn’t sure what to make of Paris, Texas at first. It opens with a twangy Ry Cooder slide guitar playing as some grubby dude in a tattered suit and a red baseball cap wanders through a desert in the American Southwest. Carrying only a plastic gallon water jug, he stumbles into a gas station bar and passes out. When he comes to, he’s in some town hospital– a sad, one-room affair staffed with a lone German physician (Bernhardt Wicki)– and refuses to speak. Insert eyeroll here.

This man, Travis (Harry Dean Stanton), has a brother, Walt (Dean Stockwell), who comes from Los Angeles to a dubious rescue. Slowly, it is revealed that Travis has been M.I.A. for four years. He had a family and a life, and lost everything except a plot of land in Paris…Texas, that is. Walt reunites Travis with his son, Hunter (Hunter Carson). After an awkward adjustment, Travis and Hunter hit the road in search of wife and mom Jane (Nastassja Kinski), who sends Hunter a check each month from a bank in Houston even though she no longer speaks to him.

I love this film, and I can’t come up with anything negative to say about it. Written by playwright Sam Shepard, adapted by L.M. Kit Carson, and directed by Wim Wenders, it’s closer to perfect than any other film I’ve seen in a long time. The story is beautifully simple, and unfolds poetically (as corny as that sounds). The characters, on the other hand, are anything but simple; they’re flawed, searching, frustrating, and real. So much happens without a lot of action: the small, quiet events that transpire here are big, magic moments of truth. The desert scenery, highways, and big sky are more than just a stunning backdrop: they reinforce themes of loss, redemption, and sacrifice that surface throughout the story. Absolutely timeless and flawless.