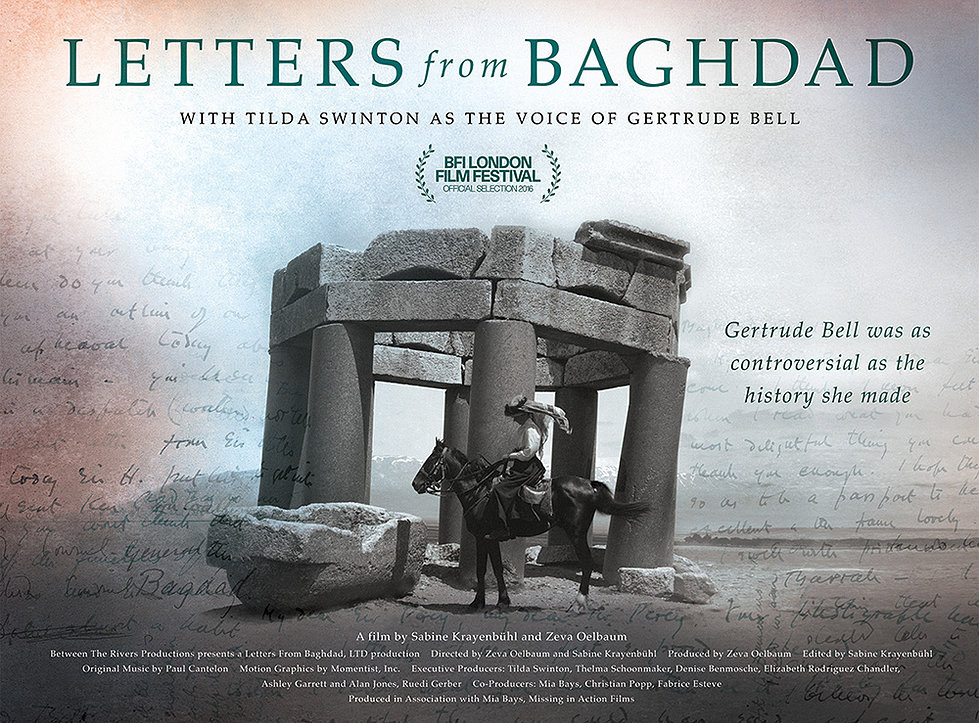 “We rushed into the business with our usual disregard for a comprehensive political scheme.”

According to the promotional poster for Sabine Krayenbühl and Zeva Oelbaum’s Letters from Baghdad, the so-called “Queen of the Desert” and “female Lawrence of Arabia” Gertrude Bell “was as controversial as the history she made.” Well, that certainly sounds promising!

Born into a wealthy family, Bell immersed herself in the Middle East in the early 20th Century and used her talents as a writer and a schmoozer to intimately acquaint herself with the area, its people, and their culture (https://en.wikipedia.org/wiki/Gertrude_Bell). Her contacts with influential expats and various Arab leaders combined with her knowledge of the culture led to an appointment as a British officer during World War I and a direct hand in drawing up the borders of modern Iraq.

Tilda Swinton gives Bell her voice, reading off camera Bell’s actual writings about events that occurred on her many trips and the people she met. In Bell’s own words, Swinton offers history, observations, and even some Victorian Era dish. Bell had at least as much influence as T. E. Lawrence a.k.a. Lawrence of Arabia (played here by Eric Loscheider in a staged “talking head” interview made to look like old footage).

Bell’s life and the impact of her deeds a century later make for an interesting story. Painstakingly researched, Krayenbühl and Oelbaum pull from diverse source material—letters, diaries, photos—to show what cities like Baghdad and Damascus were like a hundred years ago. They do a great job humaninzing Bell, getting into personality flaws and personal disappointments. In both respects, Letters to Baghdad works really well.

Not everything works as well as it could, though. Some important items are treated superfically. For example, they mention the tension between the Sunni, Shia, and Kurds even back then, but Krayenbühl and Oelbaum don’t delve into it. They touch on Bell’s reasoning for the borders she devised, but they don’t give much critical assessment to it. I left with the distinct feeling that I didn’t get the whole story. Another problem: the staged interviews give a lot of information, but they’re cheesy.

I found myself glancing at my watch about halfway through Letters from Baghdad. It’s a well made documentary, but it’s not as enthralling as it promises to be.

Production: Between the Rivers Productions, Letters From Baghdad, Missing in Action Films